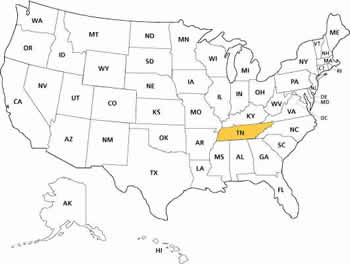 While we do not have a local office in your state, Affordable 35mm Slide Scanning has provided services for customers all over Tennessee, including Memphis, Nashville, Davidson, Knoxville, Chattanooga, Clarksville, Murfreesboro, Jackson, Johnson City, Franklin, Hendersonville, and the United States and Canada since 2002. In all that time we have worked with multiple people, university's and businesses with many different needs and end results. Our customers are very important to us and they are our best salespeople.

"The area now known as Tennessee was first settled by Paleo-Indians nearly 11,000 years ago. The names of the cultural groups that inhabited the area between first settlement and the time of European contact are unknown, but several distinct cultural phases have been named by archaeologists, including Archaic, Woodland, and Mississippian, whose chiefdoms were the cultural predecessors of the Muscogee people who inhabited the Tennessee River Valley prior to Cherokee migration into the river's headwaters.

When Spanish explorers first visited the area, led by Hernando de Soto in 1539–43, it was inhabited by tribes of Muscogee and Yuchi people. Possibly because of European diseases devastating the Native tribes, which would have left a population vacuum, and also from expanding European settlement in the north, the Cherokee moved south from the area now called Virginia. As European colonists spread into the area, the native populations were forcibly displaced to the south and west, including all Muscogee and Yuchi peoples, the Chickasaw, and Choctaw.

Early during the American Revolutionary War, Fort Watauga at Sycamore Shoals (in present day Elizabethton) was attacked in 1776 by Dragging Canoe and his warring faction of Cherokee (also referred to by settlers as the Chickamauga) opposed to the Transylvania Purchase and aligned with the British Loyalists. The lives of many settlers were spared through the warnings of Dragging Canoe's cousin Nancy Ward. The frontier fort on the banks of the Watauga River later served as a 1780 staging area for the Overmountain Men in preparation to trek over the Great Smoky Mountains, to engage, and to later defeat the British Army at the Battle of Kings Mountain in North Carolina.

Eight counties of western North Carolina (and now part of Tennessee) broke off from that state in the late 1780s and formed the abortive State of Franklin. Efforts to obtain admission to the Union failed, and the counties had re-joined North Carolina by 1790. North Carolina ceded the area to the federal government in 1790, after which it was organized into the Southwest Territory. In an effort to encourage settlers to move west into the new territory of Tennessee, in 1787 the mother state of North Carolina ordered a road to be cut to take settlers into the Cumberland Settlements—from the south end of Clinch Mountain (in East Tennessee) to French Lick (Nashville). The Trace was called the “North Carolina Road” or “Avery’s Trace,” and sometimes “The Wilderness Road”. It should not be confused with Daniel Boone's road through Cumberland Gap.

Tennessee was admitted to the Union in 1796 as the 16th state. The state boundaries, according to the Constitution of the State of Tennessee, Article I, Section 31, stated that the beginning point for identifying the boundary was the extreme height of the Stone Mountain, at the place where the line of Virginia intersects it, and basically ran the extreme heights of mountain chains through the Appalachian Mountains separating North Carolina from Tennessee past the Indian towns of Cowee and Old Chota, thence along the main ridge of the said mountain (Unicoi Mountain) to the southern boundary of the state; all the territory, lands and waters lying west of said line are included in the boundaries and limits of the newly formed state of Tennessee. Part of the provision also stated that the limits and jurisdiction of the state would include future land acquisition, referencing possible land trade with other states, or the acquisition of territory from west of the Mississippi River.

The word Tennessee comes from the Cherokee town Tanasi, which along with its neighbor town Chota was one of the most important Cherokee towns and often referred to as the capital city of the Overhill Cherokee. The meaning of the word "tanasi" is lost (Mooney, 1900). Some believe that Tanasi may mean "River with a big bend," referring to the Tennessee River, or that the word Tanasi may have meant "gathering place", as a reference to government or worship for the Native American tribes pre-existent to the pioneer era.

During the administration of U.S. President Martin Van Buren, nearly 17,000 Cherokees were uprooted from their homes between 1838 and 1839 and were forced by the U.S. military to march from "emigration depots" in Eastern Tennessee (such as Fort Cass) toward the more distant Indian Territory west of Arkansas. During this relocation an estimated 4,000 Cherokees died along the way west. In the Cherokee language, the event is called Nunna daul Isunyi—"the Trail Where We Cried." The Cherokees were not the only Native Americans forced to emigrate as a result of the Indian removal efforts of the United States, and so the phrase "Trail of Tears" is sometimes used to refer to similar events endured by other Native American peoples, especially among the "Five Civilized Tribes." The phrase originated as a description of the earlier emigration of the Choctaw nation.

Many major battles of the American Civil War were fought in Tennessee—most of them Union victories. It was the last border state to secede from the Union when it joined the Confederate States of America on June 8, 1861. Ulysses S. Grant and the U.S. Navy captured control of the Cumberland and Tennessee rivers in February 1862. They held off the Confederate counterattack at Shiloh in April. Memphis fell to the Union in June, following a naval battle on the Mississippi River in front of the city. Capture of Memphis and Nashville gave the Union control of the western and middle sections; this control was confirmed at the battle of Murfreesboro in early January 1863.

The last major battles came when the Confederates invaded Middle Tennessee in November 1864 and were checked at Franklin, then totally destroyed by George Thomas at Nashville, in December. Meanwhile Andrew Johnson, a civilian, was appointed military governor by President Abraham Lincoln.

Tennessee was already mostly held by Union forces when the Emancipation Proclamation was announced, hence it was not among the states enumerated in the Proclamation, and the Proclamation did not free any slaves there. Tennessee's legislature approved an amendment to the state constitution prohibiting slavery on February 22, 1865.[8] Voters in the state approved the amendment in March. It also ratified the Thirteenth Amendment to the United States Constitution (abolishing slavery in every state) on April 7, 1865.

Andrew Johnson (a War Democrat from Tennessee) had been elected Vice President with Abraham Lincoln in 1864 and became President after Lincoln's assassination in 1865. Under Johnson's lenient re-admission policy, Tennessee was the first of the seceding states to have its elected members readmitted to the U.S. Congress, on July 24, 1866. Because Tennessee had ratified the Fourteenth Amendment, it was the only one of the formerly seceded states that did not have a military governor during the Reconstruction period.

In 1897, the state celebrated its centennial of statehood (though one year late of the 1896 anniversary) with a great exposition in Nashville. A full scale replica of the Parthenon was constructed for the celebration, located in what is now Nashville's Centennial Park.

On August 18, 1920, Tennessee became the thirty-sixth and final state necessary to ratify the Nineteenth Amendment to the United States Constitution, which provided women the right to vote.

The need to create work for the unemployed during the Great Depression, a desire for rural electrification, the need to control annual spring floodings and improve shipping capacity on the Tennessee River were all factors that drove the Federal creation of the Tennessee Valley Authority (TVA) in 1933. Through the power of the TVA projects, Tennessee quickly became the nation's largest public utility supplier.

During World War II, the availability of abundant TVA electrical power led the Manhattan Project to locate one of the principal sites for production and isolation of weapons-grade fissile material in East Tennessee. The planned community of Oak Ridge was built from scratch to provide accommodations for the facilities and workers. These sites are now Oak Ridge National Laboratory, the Y-12 National Security Complex, and the East Tennessee Technology Park.

Tennessee celebrated its bicentennial in 1996. With a yearlong statewide celebration entitled "Tennessee 200", it opened a new state park (Bicentennial Mall) at the foot of Capitol Hill in Nashville."