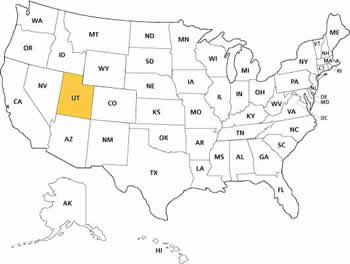 While we do not have a local office in your state, Affordable 35mm Slide Scanning has provided services for customers all over Utah, including Salt Lake City, Provo, West Valley City, West Jordan, Orem, Sandy, Ogden, St. George, Layton, Taylorsville, and the United States and Canada since 2002. In all that time we have worked with multiple people, university's and businesses with many different needs and end results. Our customers are very important to us and they are our best salespeople.

Following the assassination of Joseph Smith, Jr., in Carthage, Illinois, in 1844, the more than 11,000 Latter-Day Saints remaining in Nauvoo, IL struggled in conflict with neighbors until Brigham Young, the President of the Council of the Twelve Apostles of The Church of Jesus Christ of Latter-Day Saints, emerged as the leader of the largest portion. Brigham Young and the first band of Mormon pioneers came to the Salt Lake Valley on July 24, 1847. Over the next 22 years, more than 70,000 pioneers crossed the plains and settled in Utah.

For the first few years, Brigham Young and the thousands of early settlers of Salt Lake City struggled to survive. The barren desert land was deemed by the Mormons as desirable only because no one else would want it and they could practice their religion in peace - something they had not been afforded while the church migrated from one state to another, followed by persecution, during the first 20 years since the founding of the church in 1830.

It is not widely known that Utah was the source of many pioneer settlements located elsewhere in the West. From the beginning, Salt Lake City was seen as only the hub of a "far-flung commonwealth" of Mormon settlements. Fed by a constant supply of church converts coming from the East and around the world, Church leaders often assigned groups of church members to establish settlements throughout the West. Beginning with settlements along Utah's Wasatch front (Salt Lake City, then Bountiful and Weber Valley, then Provo and Utah Valley), irrigation enabled the establishment of fairly large pioneer populations in an area that Jim Bridger had advised Young would be inhospitable for the cultivation of crops because of frost. Throughout the remainder of the 1800s, Mormon pioneers called by Brigham Young would leave Salt Lake City and establish hundreds of other settlements in Utah, Idaho, Nevada, Arizona, Wyoming, California, Canada, and Mexico - including such notable places as Las Vegas, Nevada, Franklin, Idaho (the first white settlement in Idaho), San Bernardino, California, Star Valley, Wyoming, and Carson Valley, Nevada. Prominent settlements in Utah included St. George, Logan, and Manti (where settlers raised the first three temples in Utah, each built many years before the larger and better known temple built in Salt Lake City was completed in 1892), as well as Parowan, Cedar City, Bluff, Moab, Vernal, Fillmore (which served as the territorial capital between 1850 and 1856), Nephi, Levan, Spanish Fork, Springville, Provo Bench (now Orem), Pleasant Grove, American Fork, Lehi, Sandy, Murray, Jordan, Centerville, Farmington, Huntsville, Kaysville, Grantsville, Tooele, Roy, Brigham City, and many other smaller towns and settlements. At the time, Young had an expansionist's view of the territory he and the Mormon pioneers were settling, calling it Deseret - which church founder Smith had taught meant "honeybee" - hence the beehive which can still be found on the Utah flag, and the state's motto, "Industry."

In 1847 when the first pioneers arrived, Utah was still Mexican territory. As a consequence of the Mexican-American War, the land became the territory of the United States upon the signing of the Treaty of Guadalupe Hidalgo, February 2, 1848. The treaty was ratified by the United States Senate on March 10. In 1850, the Utah Territory was created with the Compromise of 1850, and Fillmore was designated the capital. In 1856, Salt Lake City replaced Fillmore as the territorial capital.

Disputes between the Mormon inhabitants and the US Government intensified due to The Church of Jesus Christ of Latter-day Saints' practice of plural marriage among its members. The Mormons were pushing for the establishment of the State of Deseret. The U.S. Government, which was reluctant to admit a state the size of the proposed Deseret into the union, opposed the polygamous practices of the Mormons.

As troops approached Salt Lake in northern Utah, nervous Mormon settlers and Paiutes attacked and killed 120 immigrants from Arkansas in southern Utah. The attack became known as the Mountain Meadows Massacre. The massacre became a point of contention between LDS leaders and the federal government for decades. Only one person, John D. Lee, was ever convicted of the murders, and he was executed at the massacre site.

Before troops led by Albert Sidney Johnston entered the territory, Brigham Young ordered all residents of Salt Lake City to evacuate southward to Utah Valley and sent out a force, known as the Nauvoo Legion, to delay the government's advance. Although wagons and supplies were burned, eventually the troops arrived, and Young surrendered official control to Cumming, although most subsequent commentators claim that Young retained true power in the territory. A steady stream of governors appointed by the president quit the position, often citing the unresponsiveness of their supposed territorial government. By agreement with Young, Johnston established Fort Floyd 40 miles (60 km) away from Salt Lake City, to the southwest.

Salt Lake City was the last link of the First Transcontinental Telegraph, completed in October of 1861. Brigham Young was among the first to send a message, along with Abraham Lincoln and other officials.


Bonneville Salt FlatsBecause of the American Civil War, federal troops were pulled out of Utah Territory, leaving the territory in LDS hands until Patrick E. Connor arrived with a regiment of California volunteers in 1862. Connor established Fort Douglas just three miles (5 km) east of Salt Lake City and encouraged his people to discover mineral deposits to bring more non-Mormons into the state. Minerals were discovered in Tooele County, and miners began to flock to the territory.

Beginning in 1865, Utah's Black Hawk War developed into the deadliest conflict in the territory's history. Chief Antonga Black Hawk died in 1870, but fights continued to break out until additional federal troops were sent in to suppress the Ghost Dance of 1872. The war is unique among Indian Wars because it was a three-way conflict, with mounted Timpanogos Utes led by Antonga Black Hawk exploited by federal and LDS authorities.

On May 10, 1869, the First Transcontinental Railroad was completed at Promontory Summit, north of the Great Salt Lake. The railroad brought increasing numbers of people into the state, and several influential businesspeople made fortunes in the territory.

During the 1870s and 1880s, laws were passed to punish polygamists, and in the 1890 Manifesto, the LDS Church banned polygamy. When Utah applied for statehood again, it was accepted. One of the conditions for granting Utah statehood was that a ban on polygamy be written into the state constitution. This was a condition required of other western states that were admitted into the Union later. Statehood was officially granted on January 4, 1896. Utah was the last state admitted in the Nineteenth century.

Beginning in the early 1900s, with the establishment of such national parks as Bryce Canyon National Park and Zion National Park, Utah began to become known for its natural beauty. Southern Utah became a popular filming spot for arid, rugged scenes, and such natural landmarks as Delicate Arch and "the Mittens" of Monument Valley are instantly recognizable to most national residents. During the 1950s, '60s, and '70s, with the construction of the Interstate highway system, accessibility to the southern scenic areas was made easier.

Beginning in 1939, with the establishment of Alta Ski Area, Utah has become world-renowned for its skiing. The dry, powdery snow of the Wasatch Range is considered some of the best skiing in the world. Salt Lake City won the bid for the 2002 Winter Olympics in 1995, and this has served as a great boost to the economy. The ski resorts have increased in popularity, and many of the Olympic venues scattered across the Wasatch Front continue to be used for sporting events. This also spurred the development of the light-rail system in the Salt Lake Valley, known as TRAX, and the re-construction of the freeway system around the city.

During the late 20th century, the state grew quickly. In the 1970s, growth was phenomenal in the suburbs. Sandy was one of the fastest-growing cities in the country at that time. Today, many areas of Utah are seeing phenomenal growth. Northern Davis, southern and western Salt Lake, Summit, eastern Tooele, Utah, Wasatch, and Washington counties are all growing very quickly. Transportation and urbanization are major issues in politics as development consumes agricultural land and wilderness areas."